Swimming Lessons by Mary Alice Monroe (Length: 464 pages).   This book is the 3rd book in the Beach House series (which I reviewed in June).  I mistakenly skipped the 2nd book, but it turns out it wasn’t  necessary to read that one first.  This novel has the same great storytelling and decent character development as the initial novel in the series.  I was happy to see the same super-interesting (to me, anyway) secondary plot thread regarding the rescue and rehab of loggerhead turtles.  Most of the characters from the first book are mentioned here, which is nice for the sake of continuity and for satisfying my curiosity.  However, there were over a dozen grammatical and spelling errors (which were not typos only present on a Kindle edition).  This was very annoying as the multitude of dumb mistakes (ie, “Prize” possession instead of “prized” possession) interrupted the flow of reading.  Overall, I would recommend this as an easy poolside read if you are a fan of the first book.

Toy Sooner has dealt with enough rough waves in her troubled past. It’s only been through the enduring love of a close-knit group of women on this tiny island that she’s finally started to find her footing. But as new challenges in her career arise for this young single mother, the choices and demons of her past will catch up to her. Soon Toy will learn that, like the steadfast sea turtles she cares for, a mother must find the strength within herself to make it safely to shore. 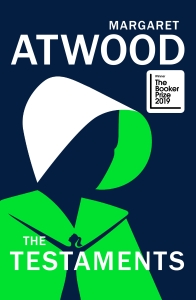 The Testaments by Margaret Atwood (Length: 381 pages).  This book is AMAZING!  I would even venture to say it’s better than the first book (The Handmaid’s Tale which I reviewed earlier this month).  Like its predecessor, this novel is also very plot-driven, which makes it an incredibly fast read.  This is written from three different perspectives (an Aunt, a young Canadian citizen and the “daughter” of two Gilead residents), which can get confusing at times.  The writing is excellent, especially the pacing of the plot, and the foreshadowing of what is to come.  This would make an excellent book club pick, especially given that its dystopian elements unfortunately are reminiscent of what we are dealing with in our country today.

WINNER OF THE BOOKER PRIZE

The Testaments is a modern masterpiece, a powerful novel that can be read on its own or as a companion to Margaret Atwood’s classic, The Handmaid’s Tale.

More than fifteen years after the events of The Handmaid’s Tale, the theocratic regime of the Republic of Gilead maintains its grip on power, but there are signs it is beginning to rot from within. At this crucial moment, the lives of three radically different women converge, with potentially explosive results.

Two have grown up as part of the first generation to come of age in the new order. The testimonies of these two young women are joined by a third: Aunt Lydia.  Her complex past and uncertain future unfold in surprising and pivotal ways.

With The Testaments, Margaret Atwood opens up the innermost workings of Gilead, as each woman is forced to come to terms with who she is, and how far she will go for what she believes.

Defending Jacob by William Landay (Length: 431 pages).  This was my CrossFit book club’s choice for August.  I thought it was just okay, honestly.  Perhaps because I was a criminal prosecutor I found the legal aspect to be pretty inaccurate and thus, hard to believe.  The mystery at the heart of the plot is decent, but it’s a bit too easy to figure out what is going to happen, which ruins the thrill for me.  The characters aren’t very deep, but that is part of the central mystery, so that can be forgiven.  The resolution is a bit abrupt, which is odd, given the long build up to the end.  This was made into a TV series on Apple TV (starring Chris Evans and Michelle Dockery) and in my opinion, the TV series is a lot better than the book, even with the noticeable differences between the two.  You can watch the series without reading the book, which is what I’d recommend.

Andy Barber has been an assistant district attorney for two decades. He is respected. Admired in the courtroom. Happy at home with the loves of his life: his wife, Laurie, and their teenage son, Jacob. Then Andy’s quiet suburb is stunned by a shocking crime: a young boy stabbed to death in a leafy park. And an even greater shock: The accused is Andy’s own son—shy, awkward, mysterious Jacob.

Andy believes in Jacob’s innocence. Any parent would. But the pressure mounts. Damning evidence. Doubt. A faltering marriage. The neighbors’ contempt. A murder trial that threatens to obliterate Andy’s family. It is the ultimate test for any parent: How far would you go to protect your child? It is a test of devotion. A test of how well a parent can know a child. For Andy Barber, a man with an iron will and a dark secret, it is a test of guilt and innocence in the deepest sense.

How far would you go?