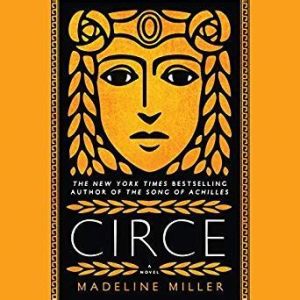 Circe by Madeline Miller (Length: 353 pages).  I LOVED this book!  After hearing about this book for months, I finally was able to read it.  I could.not.put.it.down.  It really does tell the ultimate story where you cannot wait to find out what happens next.  I possess a basic knowledge of Greek mythology, and I was somewhat familiar with many of the secondary characters in this book, but this novel really sparked an interest in mythology (and this author).  Incredibly detailed characters, an engaging and gripping plot and fantastic details which set the scene so well.  The female perspective of the narrator really makes this book a must read!

In the house of Helios, god of the sun and mightiest of the Titans, a daughter is born. But Circe is a strange child–not powerful, like her father, nor viciously alluring like her mother. Turning to the world of mortals for companionship, she discovers that she does possess power–the power of witchcraft, which can transform rivals into monsters and menace the gods themselves.

Threatened, Zeus banishes her to a deserted island, where she hones her occult craft, tames wild beasts and crosses paths with many of the most famous figures in all of mythology, including the Minotaur, Daedalus and his doomed son Icarus, the murderous Medea, and, of course, wily Odysseus.

But there is danger, too, for a woman who stands alone, and Circe unwittingly draws the wrath of both men and gods, ultimately finding herself pitted against one of the most terrifying and vengeful of the Olympians. To protect what she loves most, Circe must summon all her strength and choose, once and for all, whether she belongs with the gods she is born from, or the mortals she has come to love.

With unforgettably vivid characters, mesmerizing language and page-turning suspense, Circe is a triumph of storytelling, an intoxicating epic of family rivalry, palace intrigue, love and loss, as well as a celebration of indomitable female strength in a man’s world. 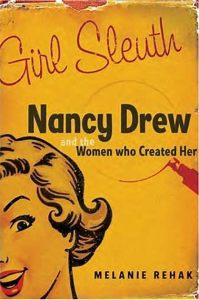 Girl Sleuth:  Nancy Drew and the Women Who Created Her by Melanie Rehak (Length: 387 pages).  I’m a HUGE Nancy Drew fan (as are most women of my generation), so I was excited to finally read this book.  It’s VERY slow in the beginning (in fact, I’d recommend you skim the first 5 chapters).  My love of this seminal mystery series was absolutely re-ignited after reading this excellent peek into the authors who created this series, as well as the world of ghost-writing and publishing.  I recommend this as a library book, and only for true fans of this sweet series.

The plucky “titian-haired” sleuth solved her first mystery in 1930—and eighty million books later, Nancy Drew has survived the Depression, World War II, and the sixties (when she was taken up with a vengeance by women’s libbers) to enter the pantheon of American culture. As beloved by girls today as she was by their grandmothers, Nancy Drew has both inspired and reflected the changes in her readers’ lives. Here, in a narrative with all the page-turning pace of Nancy’s adventures, Melanie Rehak solves an enduring literary mystery: Who created Nancy Drew? And how did she go from pulp heroine to icon?

The brainchild of children’s book mogul Edward Stratemeyer, Nancy was brought to life by two women: Mildred Wirt Benson, a pioneering journalist from Iowa, and Harriet Stratemeyer Adams, a well-bred wife and mother who took over her father’s business empire as CEO. In this century-spanning, “absorbing and delightful” story, the author traces their roles—and Nancy’s—in forging the modern American woman (The Wall Street Journal). 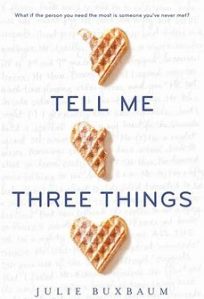 Tell Me Three Things by Julie Buxbaum (Length: 332 pages).  This is the second YA novel by this author I’ve read.  (I read and reviewed What to Say Next in February of this year.)  I think I loved this novel even more than the first one I read.  I really enjoy this author’s writing style, which is good because I have yet another one of her novels ready to go on my Kindle.  She excels in snappy dialogue, cute plots, and a well-developed narrator who is actually both relatable AND likable.  I think this novel is appropriate for ages 13 and up, if you’re considering this for a teen.

Funny and romantic, this tug-at-your-heartstrings contemporary YA debut is perfect for readers of Rainbow Rowell, Jennifer Niven, and E. Lockhart.

Everything about Jessie is wrong. At least, that’s what it feels like during her first week as a junior at her new ultra-intimidating prep school in Los Angeles. It’s been barely two years since her mother’s death, and because her father eloped with a woman he met online, Jessie has been forced to move across the country to live with her stepmonster and her pretentious teenage son.Just when she’s thinking about hightailing it back to Chicago, she gets an email from a person calling themselves Somebody/Nobody (SN for short), offering to help her navigate the wilds of Wood Valley High School. Is it an elaborate hoax? Or can she rely on SN for some much-needed help?

In a leap of faith—or an act of complete desperation—Jessie begins to rely on SN, and SN quickly becomes her lifeline and closest ally. Jessie can’t help wanting to meet SN in person. But are some mysteries better left unsolved? 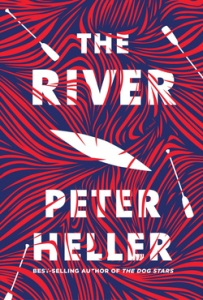 The River by Peter Heller (Length: 273 pages).  Wow.  Just wow.  This is a fantastic book!!  It’s a very fast-paced adventure (I read it in 2.5 hours, just one sitting), and your heartrate will absolutely increase as you read it.  😉  The author paints an incredible scene (on a river in Canada) and a very vivid sense of place, between the river and lakes, as well as the surrounding nature.   However, he develops the two main characters just as carefully, and you immediately respect and care about them.  This would make an excellent movie!  A must read this summer.

From the best-selling author of The Dog Stars, the story of two college students on a wilderness canoe trip–a gripping tale of a friendship tested by fire, white water, and violence

Wynn and Jack have been best friends since freshman orientation, bonded by their shared love of mountains, books, and fishing. Wynn is a gentle giant, a Vermont kid never happier than when his feet are in the water. Jack is more rugged, raised on a ranch in Colorado where sleeping under the stars and cooking on a fire came as naturally to him as breathing. When they decide to canoe the Maskwa River in northern Canada, they anticipate long days of leisurely paddling and picking blueberries, and nights of stargazing and reading paperback Westerns. But a wildfire making its way across the forest adds unexpected urgency to the journey. When they hear a man and woman arguing on the fog-shrouded riverbank and decide to warn them about the fire, their search for the pair turns up nothing and no one. But: The next day a man appears on the river, paddling alone. Is this the man they heard? And, if he is, where is the woman? From this charged beginning, master storyteller Peter Heller unspools a headlong, heart-pounding story of desperate wilderness survival.