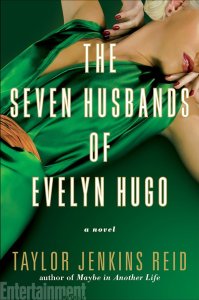 The Seven Husbands of Evelyn Hugo  by Taylor Jenkins Reid (Length: 401 pages).  This is a book that absolutely lives up to its hype!  The basic premise concerns a young biographer hired by a retired glamourous Hollywood star, who is telling her story bit by bit.  I was picturing the movie in my head as I was reading, and that speaks to the fantastic character development and attention to detail in this fantastic novel.   This is a true page-turner and it’s a not-to-be-missed read.

From the Publisher: In this entrancing novel “that speaks to the Marilyn Monroe and Elizabeth Taylor in us all” (Kirkus Reviews), a legendary film actress reflects on her relentless rise to the top and the risks she took, the loves she lost, and the long-held secrets the public could never imagine.

Aging and reclusive Hollywood movie icon Evelyn Hugo is finally ready to tell the truth about her glamorous and scandalous life. But when she chooses unknown magazine reporter Monique Grant for the job, no one is more astounded than Monique herself. Why her? Why now?

Monique is not exactly on top of the world. Her husband has left her, and her professional life is going nowhere. Regardless of why Evelyn has selected her to write her biography, Monique is determined to use this opportunity to jumpstart her career.

Summoned to Evelyn’s luxurious apartment, Monique listens in fascination as the actress tells her story. From making her way to Los Angeles in the 1950s to her decision to leave show business in the ‘80s, and, of course, the seven husbands along the way, Evelyn unspools a tale of ruthless ambition, unexpected friendship, and a great forbidden love. Monique begins to feel a very real connection to the legendary star, but as Evelyn’s story near its conclusion, it becomes clear that her life intersects with Monique’s own in tragic and irreversible ways.

Thanks, Obama: My Hopey, Changey White House Years by David Litt (Length: 320 pages).  I absolutely adored this book!  This is a junior speechwriter’s memoir of his 8 years working for both the DNC and President Obama.  The author is VERY witty, intelligent, well-read and literally LOL funny!  One of my favorite excerpts from this book illustrates both this author’s quick-witted writing as well as my personal sense of humor:

Take prepositions.  Valerie [Jarrett] followed the rule that you could never use one to end a sentence.  I found this unnecessary.  In my own writing, preposition placement isn’t something I lose sleep over.  It belonged to Valerie, and the preposition rule was one about which I did not argue.

Right?!  How clever is that?  If you get this humor, this book is for you.  I personally loved this book, and would recommend to anyone who appreciates good writing and who enjoys an insider’s look into the White House.

From the Publisher:  More than any other presidency, Barack Obama’s eight years in the White House were defined by young people – twenty-somethings who didn’t have much experience in politics (or anything else, for that matter), yet suddenly found themselves in the most high-stakes office building on earth. David Litt was one of those twenty-somethings. After graduating from college in 2008, he went straight to the Obama campaign. In 2011, he became one of the youngest White House speechwriters in history. Until leaving the White House in 2016, he wrote on topics from healthcare to climate change to criminal justice reform. As President Obama’s go-to comedy writer, he also took the lead on the White House Correspondents’ Dinner, the so-called “State of the Union of jokes.”

Now, in this refreshingly honest memoir, Litt brings us inside Obamaworld. With a humorists’ eye for detail, he describes what it’s like to accidentally trigger an international incident or nearly set a president’s hair aflame. He answers questions you never knew you had: Which White House men’s room is the classiest? What do you do when the commander in chief gets your name wrong? Where should you never, under any circumstances, change clothes on Air Force One? With nearly a decade of stories to tell, Litt makes clear that politics is completely, hopelessly absurd.

But it’s also important. For all the moments of chaos, frustration, and yes, disillusionment, Litt remains a believer in the words that first drew him to the Obama campaign: “People who love this country can change it.” In telling his own story, Litt sheds fresh light on his former boss’s legacy. And he argues that, despite the current political climate, the politics championed by Barack Obama will outlive the presidency of Donald Trump.

Full of hilarious stories and told in a truly original voice, Thanks, Obama is an exciting debut about what it means – personally, professionally, and politically – to grow up.

Beyond Belief: My Secret Life Inside Scientology and My Harrowing Escape by Jenna Miscavige Hill (Length: 427 pages).   True confession: I’ve always been fascinated with the mindset of those who join and belong to cults and evangelical-type religions.  I’m currently obsessed with Leah Remini’s “Scientology and the Aftermath” the Emmy-award winning show on A&E, so when this Kindle book popped up on an Amazon Daily Deal, I decided to check it out.  This is an incredibly interesting and detailed account of the life of someone born into Scientology, who also happens to be the niece of the “Chairman” of Scientology, David Miscavige.  The content of this book is fascinating, but fair warning that there are lots of spelling and grammatical errors (at least in the Kindle edition) which I found to be distracting at times.  Of course, the author never received formal schooling so maybe that explains it?  😉   Definitely worth your time if you’re interested in a unique perspective of this insane religious cult.

From the Publisher:  Jenna Miscavige Hill, niece of Church of Scientology leader David Miscavige, was raised as a Scientologist but left the controversial religion in 2005. In Beyond Belief, she shares her true story of life inside the upper ranks of the sect, details her experiences as a member Sea Org—the church’s highest ministry, speaks of her “disconnection” from family outside of the organization, and tells the story of her ultimate escape.

In this tell-all memoir, complete with family photographs from her time in the Church, Jenna Miscavige Hill, a prominent critic of Scientology who now helps others leave the organization, offers an insider’s profile of the beliefs, rituals, and secrets of the religion that has captured the fascination of millions, including some of Hollywood’s brightest stars such as Tom Cruise and John Travolta.