Turning Angel by Greg Iles (Length: 672 pages).   This is the second novel in the Penn Cage series.  The best friend of Penn Cage stands accused of the murder of a 17 year old high school student.  The author really does a fantastic job, once again, of painting very vivid scenes of this Southern town and culture, and the plot is fast-paced.  This page turner features some fantastic plot points, which kept me guessing as a reader.  I’d definitely recommend this book in the series.

From the Publisher:  Turning Angel marks the long-awaited return of Penn Cage, the lawyer hero of The Quiet Game, and introduces Drew Elliott, the highly respected doctor who saved Penn’s life in a hiking accident when they were boys. As two of the most prominent citizens of Natchez, Drew and Penn sit on the school board of their alma mater, St. Stephen’s Prep. When the nude body of a young female student is found near the Mississippi River, the entire community is shocked—but no one more than Penn, who discovers that his best friend was entangled in a passionate relationship with the girl and may be accused of her murder.

On the surface, Kate Townsend seems the most unlikely murder victim imaginable. A star student and athlete, she’d been accepted to Harvard and carried the hope and pride of the town on her shoulders. But like her school and her town, Kate also had a secret life—one about which her adult lover knew little. When Drew begs Penn to defend him, Penn allows his sense of obligation to override his instinct and agrees. Yet before he can begin, both men are drawn into a dangerous web of blackmail and violence. Drew reacts like anything but an innocent man, and Penn finds himself doubting his friend’s motives and searching for a path out of harm’s way.

More dangerous yet is Shad Johnson, the black district attorney whose dream is to send a rich white man to death row in Mississippi. At Shad’s order, Drew is jailed, the police cease hunting Kate’s killer, and Penn realizes that only by finding Kate’s murderer himself can he save his friend’s life.

With his daughter’s babysitter as his guide, Penn penetrates the secret world of St. Stephen’s, a place that parents never see, where reality veers so radically from appearance that Penn risks losing his own moral compass. St. Stephen’s is a dark mirror of the adult world, one populated by steroid-crazed jocks, girls desperate for attention, jaded teens flirting with nihilism, and hidden among them all—one true psychopath. It is Penn’s journey into the heart of his alma mater that gives Turning Angel its hypnotic power, for on that journey he finds that the intersection of the adult and nearly adult worlds is a dangerous place indeed. By the time Penn arrives at the shattering truth behind Kate Townsend’s death, his quiet Southern town will never be the same.

Gods in Alabama by Joshilyn Jackson (Length: 320 pages).   I’ve got conflicting feelings about this book.  While I don’t think I’m overly judgmental (and I’m as liberal as they come), I found myself absolutely shocked at the protagonist’s behavior as a high school girl (shown in vivid flashbacks), as I found it to be very disturbing.  The protagonist isn’t likeable at all, but the author’s writing did cause me to keep reading.  I particularly enjoyed the witty repartee between various characters and it’s this appropriately-paced and well-written dialogue that ultimately redeems the book to me in the end.  While I don’t wholeheartedly recommend it (and absolutely not if you’re particularly conservative), I am glad I took the time to read it and to finish it.

From the Publisher:  For 10 years Arlene has kept her promises, and God has kept His end of the bargain. Until now.  When an old schoolmate from Possett turns up at Arlene’s door in Chicago asking questions about Jim Beverly, former quarterback and god of Possett High, Arlene’s break with her former hometown is forced to an end. At the same time, Burr, her long-time boyfriend, has raised an ultimatum: introduce him to her family or consider him gone. Arlene loves him dearly but knows her lily white (not to mention deeply racist) Southern Baptist family will not understand her relationship with an African American boyfriend. Reluctantly, Arlene bows to the pressure, and she and Burr embark on the long-avoided road trip back home. As Arlene digs through guilt and deception, her patched-together alibi begins to unravel, and she discovers how far she will go for love and a chance at redemption.

The Marriage Lie by Kimberly Belle (Length: 352 pages).   I picked up this book because of the various reviewers’ comparisons of this novel to The Girl on the Train and Gone Girl.   While neither of those books were favorite reads of mine (I’ll save those reviews for another day), I do enjoy a well-written psychological thriller or mystery, and I was really hoping this would be worth a read.  And it was!  This book was an absolute page-turner, and kept me guessing until the very end.  While this isn’t the best writing I’ve ever read, it wasn’t bad to the point of being distracting (ain’t no one got time for that!) and the author’s development of the main characters was excellent here.  I found the ending to be very satisfying (after my heart calmed down enough to process it).  Definitely worth a read!

From the Publisher:   Everyone has secrets… Iris and Will have been married for seven years, and life is as close to perfect as it can be. But on the morning Will flies out for a business trip to Florida, Iris’s happy world comes to an abrupt halt: another plane headed for Seattle has crashed into a field, killing everyone on board and, according to the airline, Will was one of the passengers.

Grief stricken and confused, Iris is convinced it all must be a huge misunderstanding. Why did Will lie about where he was going? And what else has he lied about? As Iris sets off on a desperate quest to uncover what her husband was keeping from her, the answers she finds shock her to her very core.

Windfall by Jennifer E. Smith (Length: 434 pages).   Full disclosure: this is a YA (young adult) novel.  I do try to preview some novels for my tween daughter, and often I get sucked in if the plot or characters are well-written enough.  This is one of those books that’s appropriate for tweens but it’s also fun to read for adults.  I really enjoyed the lottery winner angle of the book and I kept reading further to see how the characters were affected by such a huge windfall of money.  While the romance is a bit cheesy (as YA novel romances should be, in my opinion), the author does manage to make the main characters three-dimensional enough to be very interesting and to make the reader feel empathy for the events that affect the characters.  Pick this up for a tween or teen you know and read it too!

From the Publisher:  Alice doesn’t believe in luck—at least, not the good kind. But she does believe in love, and for some time now, she’s been pining for her best friend, Teddy. On his eighteenth birthday—just when it seems they might be on the brink of something—she buys him a lottery ticket on a lark. To their astonishment, he wins $140 million, and in an instant, everything changes.

At first, it seems like a dream come true, especially since the two of them are no strangers to misfortune. As a kid, Alice won the worst kind of lottery possible when her parents died just over a year apart from each other. And Teddy’s father abandoned his family not long after that, leaving them to grapple with his gambling debts. Through it all, Teddy and Alice have leaned on each other. But now, as they negotiate the ripple effects of Teddy’s newfound wealth, a gulf opens between them. And soon, the money starts to feel like more of a curse than a windfall.

As they try to find their way back to each other, Alice learns more about herself than she ever could have imagined . . . and about the unexpected ways in which luck and love sometimes intersect. 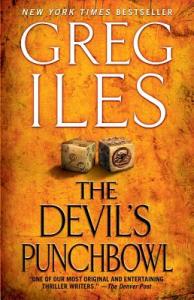 The Devil’s Punchbowl by Greg Iles (Length: 594 pages).   Um.  This one is tough.  This is the third novel in the Penn Cage series, and it’s another extremely well-written thriller, with very interesting characters.  Having said that, the subject matter (dog-fighting and violence against women) make this one gruesome read.  While I think these are two issues that should be written about (and arguably are somewhat related), even as a retired criminal prosecutor, I didn’t have the stomach to read some passages of this book.  However, if you are able to handle these topics, they definitely are not gratuitous in any way to this novel, and in fact are part of what makes this novel such a page-turner.   Let me know what you think if you take a chance on this one!

From the Publisher:  From the #1 New York Times bestselling author of the Penn Cage series comes an electrifying thriller that reveals a world of depravity, sex, violence, and the corruption of a Southern town. As a prosecuting attorney in Houston, Penn Cage sent hardened killers to death row. But it is as mayor of his hometown—Natchez, Mississippi—that Penn will face his most dangerous threat. Urged by old friends to try to restore this fading jewel of the Old South, Penn has ridden into office on a tide of support for change. But in its quest for new jobs and fresh money, Natchez, like other Mississippi towns, has turned to casino gambling, and now five fantastical steamboats float on the river beside the old slave market at Natchez like props from Gone With the Wind.

But one boat isn’t like the others. Rumor has it that the Magnolia Queen has found a way to pull the big players from Las Vegas to its Mississippi backwater. And with them—on sleek private jets that slip in and out of town like whispers in the night—come pro football players, rap stars, and international gamblers, all sharing an unquenchable taste for one thing: blood sport—and the dark vices that go with it. When a childhood friend of Penn’s who brings him evidence of these crimes is brutally murdered, the full weight of Penn’s failure to protect his city hits home. So begins his quest to find the men responsible. But it’s a hunt he begins alone, for the local authorities have been corrupted by the money and power of his hidden enemy.