The Boys in the Boat by Daniel James Brown (Length: 417 pages).   This is one of the best historical accounts of a sport and a sporting event that I’ve ever read.  This cues up all of the emotions with the author’s vivid descriptions of the action, the men who rowed in the boat as well as their coaches, and even the setting (which is a literature trifecta, in my opinion: plot, characters and setting are all perfect here).   I loved the details about the sport of rowing (something I do very poorly in my CrossFit gym), and I learned so much about the mechanics as well as the history of the sport.  The characters are drawn with such care and depth, especially Joe Rantz, the author’s primary focus, as he was able to meet him and interview him shortly before his death.  This is an excellent travel read, and I’m also recommending that my CrossFit book club read it because of the focus on rowing.  This is a must read!

For readers of Unbroken, out of the depths of the Depression comes an irresistible story about beating the odds and finding hope in the most desperate of times—the improbable, intimate account of how nine working-class boys from the American West showed the world at the 1936 Olympics in Berlin what true grit really meant.

It was an unlikely quest from the start. With a team composed of the sons of loggers, shipyard workers, and farmers, the University of Washington’s eight-oar crew team was never expected to defeat the elite teams of the East Coast and Great Britain, yet they did, going on to shock the world by defeating the German team rowing for Adolf Hitler. The emotional heart of the tale lies with Joe Rantz, a teenager without family or prospects, who rows not only to regain his shattered self-regard but also to find a real place for himself in the world. Drawing on the boys’ own journals and vivid memories of a once-in-a-lifetime shared dream, Brown has created an unforgettable portrait of an era, a celebration of a remarkable achievement, and a chronicle of one extraordinary young man’s personal quest. 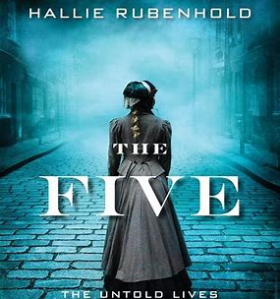 The Five: The Untold Lives of the Women Killed by Jack the Ripper by Hallie Rubenhold (Length: 359 pages).  This was my book club’s pick for April, and I found it to be so interesting!  This is a non-fiction historical account of each of the five known victims of Jack the Ripper in Victorian-era London.  The author’s premise is that the victims were not all prostitutes, contrary to what the newspapers salaciously crowed to their readers.  In fact, all of the women were very poor, down on their luck and semi-homeless women in poverty-stricken London.  I found the author’s research about life in the Victorian era to be fascinating.  She goes into great detail about how families were structured, how they lived, their occupation and about London in general.  This book, although it’s a history book, is not dry or boring in the slightest.  However, if you are looking to read about Jack the Ripper and the murders themselves, this isn’t the book for you as there are zero details about the killings.  The author’s sole focus on the victims (and their families) is purposeful, and I really appreciate it, and her book.

What they had in common was the year of their murders: 1888. The person responsible was never identified, but the character created by the press to fill that gap has become far more famous than any of these five women.

For more than a century, newspapers have been keen to tell us that “the Ripper” preyed on prostitutes. Not only is this untrue, as historian Hallie Rubenhold has discovered, but it has prevented the real stories of these fascinating women from being told. Now, in this devastating narrative of five lives, Rubenhold finally sets the record straight, revealing a world not just of Dickens and Queen Victoria, but of poverty, homelessness, and rampant misogyny. They died because they were in the wrong place at the wrong time—but their greatest misfortune was to be born women.