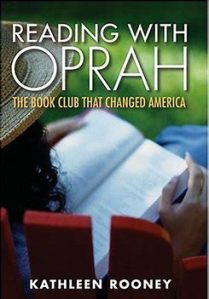 Reading with Oprah: the Book Club that Changed America by Kathleen Rooney (Length: 230 hardcover pages).  I don’t recall how I heard about this book, but any books about books always appeal to me.  This, with the exception of a few juicier sections, was entirely too dry and academic for me to really enjoy.  (Speed-reading is a useful skill to get through this book ;).  The author does cover a fascinating topic, however.  In the past, critics have taken exception to Oprah’s book choices, and this author explores the high brow/low brow literature distinction here, before concluding (with the exception of 5 truly awful book choices) that the Oprah Book Club book choices actually do have some redeeming literary value.  The chapter on the Jonathan Franzen (the author of “Corrections”) controversy is very interesting here.  As a lifelong reader of many of the OBC selections, I found this book to be an interesting (albeit too dry) analysis of the impact of the club on America.

Adored by its fans, deplored by its critics, the Oprah Book Club has been at the center of arguments about cultural authority and literary taste since its inception in 1996. Virtually everyone seems to have an opinion about this monumental institution with its revolutionary and controversial fusion of the literary, the televisual, and the commercial. Reading with Oprah by Kathleen Rooney is the first in-depth look at the phenomenon that is the OBC.

Rooney combines extensive research with a lively personal voice and engaging narrative style to untangle the myths and presuppositions surrounding the club, to reveal its complex and far-reaching cultural influence, confronting head-on how the club became a crucible for the heated clash between high and low literary taste. Comprehensive and up-to-date, the book features a wide survey of recent commentary, and describes why the club closed in 2002, as well as why it resumed almost a year later in 2003, with a new focus on great books. Rooney also provides the most extensive analysis yet of the Oprah WinfreyJonathan Franzen contretemps.

How to Find Love in a Bookshop by Veronica Henry (Length: 348 pages).  Yet another book about books that I ADORE!  Set in a bookstore in England, at first this seems like way too many random characters are introduced.  But then, the author somehow fleshes all of them out sufficiently for the reader to see how their relationships with one another have meaning.  I love the setting of the book (mostly in the bookshop) and how the store is fixed up (every book lover’s dream).  The plot is very cute, and the ending is satisfying.  This would make a very cute Netflix movie . . . I’d watch it.

Nightingale Books, nestled on the main street in an idyllic little village, is a dream come true for book lovers—a cozy haven and welcoming getaway for the literary-minded locals. But owner Emilia Nightingale is struggling to keep the shop open after her beloved father’s death, and the temptation to sell is getting stronger. The property developers are circling, yet Emilia’s loyal customers have become like family, and she can’t imagine breaking the promise she made to her father to keep the store alive.

There’s Sarah, owner of the stately Peasebrook Manor, who has used the bookshop as an escape in the past few years, but it now seems there’s a very specific reason for all those frequent visits. Next is roguish Jackson, who, after making a complete mess of his marriage, now looks to Emilia for advice on books for the son he misses so much. And the forever shy Thomasina, who runs a pop-up restaurant for two in her tiny cottage—she has a crush on a man she met in the cookbook section, but can hardly dream of working up the courage to admit her true feelings.

Enter the world of Nightingale Books for a serving of romance, long-held secrets, and unexpected hopes for the future—and not just within the pages on the shelves. How to Find Love in a Bookshop is the delightful story of Emilia, the unforgettable cast of customers whose lives she has touched, and the books they all cherish. 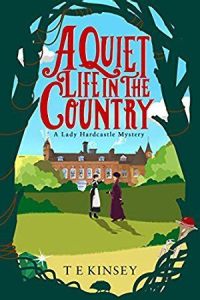 A Quiet Life in the Country by TE Kinsey (Length: 257 pages).  If you are on the hunt for a fun, easy-to-read mystery series, look no further!  This is the first novel in a series featuring Lady Hardcastle and her lady’s maid Florence Armstrong.  Set in 1908, in a small village outside of London, the ladies both have a mysterious (and exciting!) past, which is revealed bit by bit.  Flo is the narrator, and she’s very quirky and smart, with snarky quips.  The relationship between the two protagonists is a lot of fun–teasing, but loving, and with a constant witty banter.  The mystery here is not violent, but is intelligent and not easy to solve.  Excellent writing, fantastic character development, and I absolutely want to read more (there are at least 6 books in this series thus far).

Lady Emily Hardcastle is an eccentric widow with a secret past. Florence Armstrong, her maid and confidante, is an expert in martial arts. The year is 1908 and they’ve just moved from London to the country, hoping for a quiet life.

But it is not long before Lady Hardcastle is forced out of her self-imposed retirement. There’s a dead body in the woods, and the police are on the wrong scent. Lady Hardcastle makes some enquiries of her own, and it seems she knows a surprising amount about crime investigation…

As Lady Hardcastle and Flo delve deeper into rural rivalries and resentment, they uncover a web of intrigue that extends far beyond the village. With almost no one free from suspicion, they can be certain of only one fact: there is no such thing as a quiet life in the country.

The War That Saved My Life by Kimberly Brubaker-Bradley (Length: 322 pages).  This Newbery Honor middle-grade (4-7th grade) book has been on my radar for ages, and I’m so glad I finally picked it up!  This is such a sweet story of redemption by a disabled girl (Ada) who has a clubfoot in London at the beginning of World War 2.  Ada is abused (neglect and some physical abuse–not too graphic but is mentioned) by her mother because of her “deformity”, but when she and her younger brother are shipped out of the city due to the war (along with all of the other city children), she learns what it is to live.  The writing is excellent here, and the characters are very well-developed.  The plot pacing is perfect, as you’ll want to keep reading to see what happens next.  My one (small) complaint is that the transitions between the chapters are a bit odd, and are jarring at times–would love to edit this book.  Any child (9 years old and up), teen or adult will love this book!  Would be a cute parent/child book club pick as well as there’s a lot to discuss.

An exceptionally moving story of triumph against all odds set during World War II, from the acclaimed author of Jefferson’s Sons and for fans of Number the Stars.

Ten-year-old Ada has never left her one-room apartment. Her mother is too humiliated by Ada’s twisted foot to let her outside. So when her little brother Jamie is shipped out of London to escape the war, Ada doesn’t waste a minute—she sneaks out to join him.

So begins a new adventure for Ada, and for Susan Smith, the woman who is forced to take the two kids in. As Ada teaches herself to ride a pony, learns to read, and watches for German spies, she begins to trust Susan—and Susan begins to love Ada and Jamie. But in the end, will their bond be enough to hold them together through wartime? Or will Ada and her brother fall back into the cruel hands of their mother?

This masterful work of historical fiction is equal parts adventure and a moving tale of family and identity—a classic in the making. 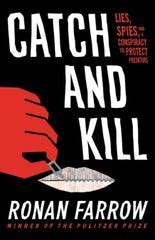 Catch and Kill by Ronan Farrow (Length: 414 pages).  Whoa!  This book is amazing and is a MUST READ.  The author (Woody Allen and Mia Farrow’s son, Ronan) is a very skilled journalist and writer who essentially was the journalist who exposed the Harvey Weinstein scandal, the scandal which prompted the reintroduction of the #metoo movement (by Alyssa Milano in response to the NY Times article regarding Weinstein).  This book is a detailed, step-by-step account of how Farrow gathered the evidence from just a small fraction of the (more than 100) women who were victimized by this studio head.  Farrow skillfully, unemotionally and professionally describes how the culture of powerful men who victimize and silence their female victims has been perpetuated for decades, even as he, himself, is being followed by investigators paid by the powerful elite.  (He does touch on the Trump and Matt Lauer rapes, but the primary focus is on Weinstein here.)  The book is very detailed and a bit lengthy, but is a very fast read–it’s incredibly well-written, and is a must read.

In this instant New York Times bestselling account of violence and espionage, Pulitzer Prize-winning investigative reporter Ronan Farrow exposes serial abusers and a cabal of powerful interests hell-bent on covering up the truth, at any cost.
In 2017, a routine network television investigation led Ronan Farrow to a story only whispered about: one of Hollywood’s most powerful producers was a predator, protected by fear, wealth, and a conspiracy of silence. As Farrow drew closer to the truth, shadowy operatives, from high-priced lawyers to elite war-hardened spies, mounted a secret campaign of intimidation, threatening his career, following his every move, and weaponizing an account of abuse in his own family.
All the while, Farrow and his producer faced a degree of resistance they could not explain — until now. And a trail of clues revealed corruption and cover-ups from Hollywood to Washington and beyond.
This is the untold story of the exotic tactics of surveillance and intimidation deployed by wealthy and connected men to threaten journalists, evade accountability, and silence victims of abuse. And it’s the story of the women who risked everything to expose the truth and spark a global movement.