The Immortalists by Chloe Benjamin (Length: 352 pages).  This book has been on so many recommended book lists, and I finally was able to get it off the Reserved list at the library.  Not sure it was worth the wait.  This book is VERY well-written, but it was too depressing for me (and I LIKE dark books!).  Essentially this is about four different siblings who have knowledge of the day they will die.  Each sibling is a dysfunctional human being, and each isn’t inherently likeable, which made it difficult for me to get emotionally involved with the novel.  The quality of the writing here is clearly why this book was an instant bestseller, but sadly, it’s not my cup of tea.

From the publisher: If you knew the date of your death, how would you live your life?

It’s 1969 in New York City’s Lower East Side, and word has spread of the arrival of a mystical woman, a traveling psychic who claims to be able to tell anyone the day they will die. The Gold children—four adolescents on the cusp of self-awareness—sneak out to hear their fortunes.

The prophecies inform their next five decades. Golden-boy Simon escapes to the West Coast, searching for love in ’80s San Francisco; dreamy Klara becomes a Las Vegas magician, obsessed with blurring reality and fantasy; eldest son Daniel seeks security as an army doctor post-9/11; and bookish Varya throws herself into longevity research, where she tests the boundary between science and immortality.

A sweeping novel of remarkable ambition and depth, The Immortalists probes the line between destiny and choice, reality and illusion, this world and the next. It is a deeply moving testament to the power of story, the nature of belief, and the unrelenting pull of familial bonds. 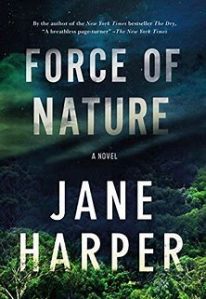 Force of Nature by Jane Harper (Length: 329 pages).  This novel is a bit of a sequel to “The Dry” which was a bit annoying to find out after  I received it from the library, as the repeated references to the protagonist (Federal Agent Aaron Falk) were oblique in nature.  The plot (five women are on a team-building hike for their company and one goes missing) is interesting enough that I wanted to keep reading further.  The writing in this mystery novel isn’t exactly “stunning” or “breathless” per the reviews, but it’s definitely worth a library check-out.  In my opinion, this novel is more about the relationships among the various characters than the mystery-driven plot, so if you read this with that proviso in mind, you’ll enjoy it as well.

Five women go on a hike. Only four return. Jane Harper, the New York Times bestselling author of The Dry, asks: How well do you really know the people you work with?

When five colleagues are forced to go on a corporate retreat in the wilderness, they reluctantly pick up their backpacks and start walking down the muddy path. But one of the women doesn’t come out of the woods. And each of her companions tells a slightly different story about what happened.

Federal Police Agent Aaron Falk has a keen interest in the whereabouts of the missing hiker. In an investigation that takes him deep into isolated forest, Falk discovers secrets lurking in the mountains, and a tangled web of personal and professional friendship, suspicion, and betrayal among the hikers. But did that lead to murder?

The Death of Mrs. Westaway by Ruth Ware (Length: 384 pages).  This is the fourth novel by this author (I’ve read all three of her previous books:  In a Dark, Dark Wood, The Woman in Cabin 10, and The Lying Game).  I’m a fan of British authors and settings in general, but while I haven’t been overly-impressed with Ms. Ware’s first three novels, I really enjoyed this fun read!  As Meredith Gray would say, “It’s very dark and twisty.”  I loved the setting and scenery in this book (Gothic manor in England), and I’m now eager to read my copy of  Rebecca  by Daphne du Maurier as this book apparently was influenced by that classic novel.  The author’s character development really shines in this book in comparison to her first three, but I was also pleasantly surprised at how difficult it was (for me at least) to solve the mystery at the book’s center.  Definitely check this one out!

From the publisher: On a day that begins like any other, Hal receives a mysterious letter bequeathing her a substantial inheritance. She realizes very quickly that the letter was sent to the wrong person—but also that the cold-reading skills she’s honed as a tarot card reader might help her claim the money.

Soon, Hal finds herself at the funeral of the deceased…where it dawns on her that there is something very, very wrong about this strange situation and the inheritance at the center of it.

Full of spellbinding menace and told in Ruth Ware’s signature suspenseful style, this is an unputdownable thriller from the Agatha Christie of our time.